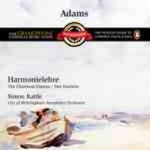 "The performances bring the most persuasive advocacy and the excellent recording is clear, vivid and spacious."
(Three Stars Penguin Stereo Guide)

"The performances bring the most persuasive advocacy and the excellent recording is clear, vivid and spacious."
(Three Stars Penguin Stereo Guide)

Simon Rattle was born in Liverpool in 1955 and studied at the Royal Academy of Music in London. In 1974 he won first prize in the John Player International Conducting Competition and became Assistant Conductor of the Bournemouth Symphony and Sinfonietta. He subsequently held a number of guest titles, including Principal Guest Conductor of the Rotterdam Philharmonic and from 1981 to 1983 was Artistic Director of the South Bank Summer Music Festival.

In 1980 he became Principal Conductor and Artistic Adviser of the City of Birmingham Symphony Orchestra and then Music Director from September 1990 until August 1998. Since October 1992, he has been Principal Guest Conductor of the Orchestra of the Age of Enlightenment (OAE) and is also Founding Patron of the Birmingham Contemporary Music Group. He was appointed Chief Conductor and Artistic Director of the Berliner Philharmoniker and took up the post in September 2002.

In 1979 he made his North American debut with the Los Angeles Philharmonic Orchestra and was their Principal Guest Conductor from 1981 until 1994, also appearing with the Cleveland Orchestra and Chicago, San Francisco, Toronto and Boston Symphony Orchestras. He made his New York debut in 1985 with the LA Philharmonic and next appeared there with the CBSO in 1988. The same year included his US opera debut (Wozzeck) with the Los Angeles Opera. His 1977 Glyndebourne debut has been followed by many productions with The London Philharmonic and, more recently, with the OAE. He made his English National Opera debut in 1985 (Katya Kabanová) and his Royal Opera House debut in 1990.