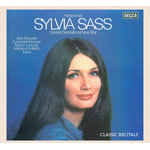 "The very first phrases of the opening aria ["In questa reggia] command attention and let you know that something rather special has arrived on the scene … it becomes quite clear that here is an exceptional singer, distinctive in timbre, distinguished in artistry … the voice glitters rather than soothes, shines rather than warms … the Lady Macbeth … is superb."
Gramophone September 1977

When this LP first appeared in 1977 Decca was sufficiently impressed with Sylvia Sass's vocal talents to herald her as "Opera's Sensational New Star" on the front of the LP cover! In view of the positive critical reaction to the recital this was certainly justified.

Sass was born in Budapest on 21 July 1951 and studied at the Liszt Academy, joining the Budapest State Opera in 1972. Her early roles included Giselda in Verdi's I Lombardi — a role she recorded under Lamberto Gardelli for Philips (she also appears in the Philips recording of Stiffelio — also with Gardelli), and in which she appeared at the Royal Opera House, Covent Garden, when the Budapest State Opera production came to London. She also appeared with Scottish Opera in 1975 as Desdemona. At the New York Met in 1977 she made her debut as Tosca.

In addition to this 1977 debut recital which showcases Sass in a number of roles with which she was so closely identified, she also sang the role of Judith in a complete Bluebeard's Castle with Sir Georg Solti, and also under his direction she recorded Donna Elvira in his first complete Don Giovanni.

I due Foscari (Complete opera)

Puccini Gold: The 30 most popular arias