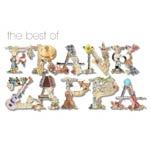 Fifteen mighty fine cuts from the master. "This is good stuff...it might not be whatever trend you are worshipping at the moment, but it is good stuff nonetheless, so, check it out." - FZ

Frank Zappa was a genius. He turned music inside-out, upside-down and back-to-front and yet, all along the way, never forgot the power of a stunning guitar solo, the pointed humor needed to deflate pomposity, the majesty of a umpteen-piece orchestra treading into new territories or the exquisite sound of streetcorner four-part harmony.

The first MOTHERS OF INVENTION album (FREAK OUT!) was released in 1966. In the more than thirty years since then, there have been more than six dozen releases, covering every imaginable -and several previously unimaginable- musical genre. Frank Zappa made some of the most extraordinary music to ever be chiseled into the groove of a plastic platter or stored as billions of zeroes-and-ones on a compact disc.

Frank Zappa albums are recordings made with dozens of incarnations of various bands, with orchestras, with computers, with about every possible combination of musicians and vocalists.

Although sometimes Frank Zappa music is difficult to exactly put your finger on, once you do it feels just like a warm handshake for your ears.

Many different kinds of people like Frank Zappa music for many different kinds of reasons. The shopping mall masses remember "Valley Girl" (from SHIP ARRIVING TOO LATE TO SAVE A DROWNING WITCH and "Don't Eat The Yellow Snow" (from APOSTROPHE'). More dedicated fans took the humour as the icing on Zappa's musical cake, which was as rich and deep as one cared, or dared, to go. One of his album titles asked the question DOES HUMOR BELONG IN MUSIC?, but FZ's fans knew better. Whether it was the biting social satire of WE'RE ONLY IN IT FOR THE MONEY, the conceptual effrontery of JOE'S GARAGE and THING-FISH, the groupie burlesques on FILLMORE EAST, JUNE 1971, the timely stabs at organized religion on YOU ARE WHAT YOU IS, the disco-era parodies on SHEIK YERBOUTI or the nasty responses to creeping censorship on FRANK ZAPPA MEETS THE MOTHERS OF PREVENTION, FZ could wear the hats of social satirist, entertainer and musical innovator on the same head.

FZ died on 4 December 1993. If Frank Zappa belongs to any musical tradition, it is that of the American original, from Scott Joplin to Charles Ives to Duke Ellington. Consciously or not, he might have been picking his own epitaph when he proudly emblazoned his earliest albums with a quote from his hero, composer Edgard Varese: "The present-day composer refuses to die."

Here is a quote FZ offered when discussing one of his lesser-selling albums many years ago:

We could not agree more.