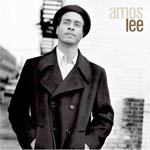 On his debut, Amos takes a minimalist instrumental approach, opting for spare, acoustic accompaniment, while letting his rich, evocative voice do the heavy lifting. With guest, Norah Jones!

Philadelphia native and former school teacher, Amos Lee draws on influences that read like a hip older sibling's record collection: Bill Withers, Donny Hathaway, John Prine, Stevie Wonder, Neil Young. But like all those artists, Lee conjures a vibe uniquely his own resulting in a unique brand of folk-soul.

Amos Lee first came to attention on a three month long stint as the opening act on Norah Jones' European tour in 2004. The eleven tracks, all composed by Amos, were produced by Lee Alexander (Norah Jones' bassist / songwriter) during two weeks of sessions at The Magic Shop in New York.

Amos takes a minimalist instrumental approach to his songs, opting for spare, acoustic accompaniment, while letting his rich, evocative voice do the heavy lifting.

Norah Jones features on two of the tracks on piano and vocals. The first single is 'Arms of a Woman', a classic ballad that could have been covered in an earlier era of soul.

"One of the area's Most-Talked-About emerging talents. He's got a sly, easygoing voice and when he slides into falsetto there's a touch of Princely flutter, as well as Jeff Buckley's raw, unedited emotions"
- Tom Moon, Philadelphia Enquirer.