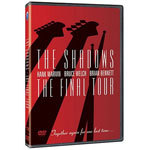 Together again for one last time.

First gaining recognition in the late '50s as the backing band for Cliff Richards, The Shadows broke out in a big way in the early '60s with the influential instrumental track, "Apache". A string of Top 10 hits followed, including "F.B.I."; "Kon Tiki"; and "Man of Mystery".

Various lineup changes throughout the years defined the band, however in June 2004, Hank Marvin; Bruce Welch; and Brian Bennett came "together again for one last time" to blaze through a set of some of their most recognizable tunes.