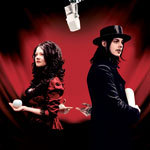 The White Stripes
Get Behind Me Satan

This is 5th album from The White Stripes - the follow-up to their incredibly successful CD, 'Elephant' - and features the brilliant first single, "Blue Orchid".

'Get Behind Me Satan' is The White Stripes' 5th album - the follow up to their incredibly successful CD, 'Elephant'.

This new album was recorded in Detroit at Jack White's Third Man Studios and contains 13 original songs, all of them written on piano, acoustic guitar and marimba. "Blue Orchid" is the brilliant first single - the video sees Jack White modeling himself after the baddest bluesman of them all, the guy responsible for giving Delta legend Robert Johnson his supernatural guitar skills: the Devil himself.

Jack White has described their new work of art as an exploration of "...characters and the ideal truth".

I Am A Bird Now