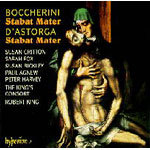 'Boccherini's chamber-music output is so prolific - more than 120 string quintets, 100 quartets and almost 50 trios - that few today can know his entire oeuvre. But this setting of the Stabat Mater - in F minor like the famous one by Pergolesi, its evident model - is a little masterpiece: spartanly scored for two sopranos and tenor and accompaniment of four strings and continuo, this "sequence for the Feast of Seven Dolours of the BVM" shares the intimate quality of Boccherini's chamber music, with only rare opportunities for operatic display. The earlier setting by the Spaniard Emanuele D'Astorga, a near contemporary of Handel's, is more overtly flamboyant, yet, with its chorus and mezzo and bass soloists - darker in colour. The King's performances are outstanding, with superb solo contributions from Susan Gritton, Sarah Fox, Susan Bickley and Paul Agnew. Two marvellous discoveries.' (The Sunday Times)

'Another well-deserved hit for this splendid team' (Classic CD)

'In both works, the solo voices, strings and organ continuo and the 18-voice chorus in the d'Astorga, present this well-conceived programme in a highly attractive and stylistic manner under the expert direction of Robert King, while the recorded sound is wonderfully transparent ... It would be difficult to imagine more satisfactory interpretations than these.' (Gramophone Early Music)

Boccherini wrote very little vocal music; however he left two settings of the Stabat Mater. It was first set in 1781 for solo soprano and strings and then in 1800 for two sopranos and tenor, obviously influenced by the hugely-popular Pergolesi Stabat Mater of 1736. Their are many similarities in the notation and harmony - even the same key of F minor is used. The writing is of extraordinary individuality and seems to come straight from the heart. This unjustly neglected piece is surely one of the most remarkable sacred compostions of the era.

Emanuele d'Astorga was one of the most colourful figures in early eighteenth-century music and his life has often been subject of legend rather than fact (brief details of which can be discovered in Robert King's illuminating booklet notes). During his life, Astorga was best known for his well-written and tuneful chamber cantatas (of which more than 150 survive) and his opera Dafni (only Act 1 now survives). But by far his most enduring work has proved to be this setting of the Stabat Mater, his only surviving sacred composition. Throughout it we hear Astorga's gift for writing warm melodies, typical of the Neopolitan style of the time and how he captures the melancholy of this most desolate of sacred texts.

This recording is of two extremely beautiful settings - the Astorga is better-known than the Boccherini, but if any recording proves that a piece should be neglected no longer, this must surely be it.