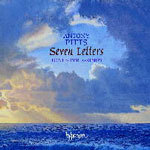 "Gloriously sung by this superb choir, Antony Pitts's collection of choral music has the potential to be a real runaway success. His is a compositional voice of real personality and imagination (no surprise to those of us who have admired Pitts's work as a truly original producer at BBC Radio 3 he launched Late Junction). Beautifully recorded, here's a collection of new music that has immediate appeal without ever relaxing into the 'easy' or the saccharine."
(Gramophone)

Antony Pitts is a distinctive new voice whose music has been premiered at Wigmore Hall in London, the Concertgebouw in Amsterdam, and the Philharmonie Kammermusiksaal in Berlin. Alongside commissions from groups as diverse as The Clerks' Group, Oxford Camerata, The Choir of Westminster Cathedral and the Swingle Singers, his mammoth forty-part motet XL (a companion piece to Tallis' Spem in alium) was recently released on the Harmonia Mundi label in a premiere performance by Rundfunkchor Berlin and Simon Halsey.
Pitts's choral music combines a jazz-infused idiom within a tight structure of traditional musical form and a response to the sacred texts which is both fervent and captivatingly heart-on-sleeve.

At the centre of this new recording is Seven Letters. Thought to be the only choral setting of St John's damning indictment of the first-century church in Asia Minor (where, we are graphically told, the inhabitants were indulging in almost every form of depravity imaginable) from the Book of Revelation, each 'letter' is declaimed by one of the seven virtuosic members of Tonus Peregrinus over a cyclical choral backdrop which insistently increases in intensity as the work moves through the seven 'letters' of the musical scale, A to G. Such multifaceted intricacy is typical of Pitts's approach in the other pieces presented here. In each case a 'pop'-style 'hook' provides the listener with an immediate entry point (this accessibility is further aided by the English-language texts used), while repeated listening allows the full scope of the musical vision gradually to unfold.

Formed by Antony Pitts in 1990, Tonus Peregrinus has steadily gained an international reputation for musical excellence, the ensemble's recording of Arvo Pärt's Passio on the Naxos label winning a Cannes Classical Award in 2004.