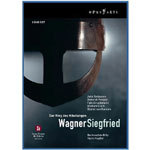 "The third segment of this interesting, well-sung Barcelona Ring is unveiled"
(Gramophone)

"Director Harry Kupfer's and designer Hans Schavernoch's second Siegfried staging is set around an increasingly dilapidated World Ash Tree. Large floor sections rise and fall to furnish a huge metal fan for Mime's smithy, a multi-clawed dragon to be fought, and to bring up Erda cocooned in the very roots of the tree (a coup that will remind Londoners of the famous Götz Friedrich Ring of the 1970s and '80s).

The costumes are rationalised, modern epic: Siegfried and Mime as workmen, the Wanderer in Homburg, shades and greatcoat, Brünnhilde in quasi-military blazer and trousers. The Wotan family (Siegfried, Wanderer, Brünnhilde) all have red hair. The Wanderer keeps an eye on Siegfried throughout, flying off a toy Woodbird from the tree's branches and even playing parts of the horn call for him - a touching portrait of a father's love for his (grand)son. Kupfer's handling of the fate of the Walsungs is one of the great threads of this Barcelona production.

Two veterans - Graham Clark and Günter von Kannen - perform with continuing ripeness and added colour, some derived from other productions they've been in. John Treleaven, soon to be Siegfried at the Royal Opera House, has the tricky character - by turns brutal, gentle, dumb and intuitive - massively in focus, even if the last act (inevitably) catches him in less than free voice. Falk Struckmann's Wanderer is a suave master of ceremonies in voice and manner, but less involving in Act 3. Deborah Polaski's Brünnhilde has ideal physical intensity and vocal stylishness.

For Bertrand de Billy and his orchestra these are relatively early Wagnerian days, and the sustaining and colouring of the long, outer acts are a challenge; the conductor is a fine accompanist rather than a heroic leader. The filming (by Catalan TV) is a primitive affair compared to the subtlety of Brian Large's work on the two Bayreuth cycles, especially in its handling of entrances and character reactions not allied to a specific sung cue. Opus Arte provides no extra items, unnecessarily retains pre- and post-act applause and presents the work on three discs as opposed to other companies' two.

The Boulez/Chereau version, about to appear on DVD, is a visual classic of Italian-influenced French beauty with astonishing, trendsetting characterisations, while the Zagrosek/Jossi Wieler is a more acerbic re-imagining of the opera as contemporary play, with Acts 1 and 3 wholly indoors. The Barenboim/Kupfer/Schavernoch Bayreuth production with Jerusalem, Tomlinson and Anne Evans in the cast, which will reach DVD shortly, is a starker, more epic version of a similar concept to Barcelona, strongly sung and conducted."
(Gramophone)

In the third work of Wagner's epic cycle, Der Ring des Nibelungen, Siegmund's shattered sword is forged once again and kills the dragon that guards the ring.

When Siegfried seizes the ring, he also receives its curse as he continues his fiery adventure of discovery and love. Filmed at Barcelona's Gran Teatre del Liceu in 2004, Harry Kupfer's stunning production, first staged in Berlin, numbers among the greatest productions of modern times and is recorded in sumptuous surround sound.