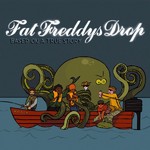 Fat Freddy's Drop
Based on a True Story (LP)

The debut album from Fat Freddy's Drop was originally issued on the band's own Drop label in its native New Zealand, where the disc promptly shipped gold and gained notoriety as the first indie album ever to hit number one on that country's pop charts. It ended up spending 42 weeks in the Top Ten. So expectations were high for the U.S. issue of Based on a True Story on the Kartel label, and the album doesn't disappoint. Although the band favors the term "hi-tek soul" to describe its music, the simple fact is that most of these songs fall squarely in the reggae/dub category, with occasional excursions into ska and jazzy, semi-electronic funk. Joe Dukie's voice is appealingly silky and soulful without being off-puttingly slick, and the band's horn section contributes alternately smooth and chunky chordal backing along with old-school organ and more modern synthesizer sounds. The mood of Based on a True Story is pretty consistently laid-back and mellow, and it's a little bit hard to identify highlights from among the album's mid-tempo offerings, but the extra funk edge of "Ray Ray" is especially nice, and "Cay's Crays" nicely evokes early UB40. The swinging ska beat and jazz flute of "Wandering Eye" are also lots of fun. Highly recommended. - AllMusic