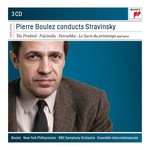 Pierre Boulez transformed the musical tastes of a generation with his groundbreaking, lucid interpretations of early 20th-century repertoire. Gramophone wrote that his death in 2016 marked "the end of a whole way of perceiving music". This collection of three CDs brings together the key early ballet scores of Stravinsky with a number of other works by the Russian composer, all recorded with ensembles with whom Boulez maintained a close relationship. With the New York Philharmonic are recordings of the Firebird and the Pulcinella suite, Petrushka, the tone poem Chant du rossignol and the Symphonies of Wind Instruments.