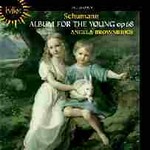 The Album falls into two parts, with the first eighteen pieces designed for young children and the later numbers for 'more grown-up' players.

THOUGH BACH, MOZART AND OTHERS had written music for young and inexpert performers, Schumann was the first great composer to penetrate imaginatively into the world of children. The earliest of his works to evoke childhood was Kinderszenen ('Scenes of Childhood') of 1838, whose tender portraits of a carefree innocence are intimately bound up with his longing for Clara Wieck. But, though technically undemanding, the Kinderszenen are essentially adults' music, in Schumann's words 'reminiscences of a grown-up for grown-ups'. Ten years later, now married to Clara and with three daughters, Schumann composed his Album for the Young, a collection of forty-three miniatures written specifically for children. The first pieces were intended as a birthday present for his eldest daughter, Marie, who was seven on 1 September 1848; then, as Schumann wrote to a friend, 'one after another was added', with a gradual increase in difficulty. As an entry in Clara's family diary reveals, Schumann was encouraged to produce an extended collection of pieces for children by the thought that most of the music learned in piano lessons was worthless; and his didactic purpose is underlined by his original intention of supplementing the pieces with extracts from other composers' works, and by the list of musical maxims (Musikalische Haus- und Lebensregeln) which he added to the second, 1851, edition of the Album. These include such pungently worded precepts as 'Don't just tinkle at the keys!' and 'Play rhythmically! Many virtuosi sound like a drunkard walking! Don't imitate them!'

The Album falls into two parts, with the first eighteen pieces designed for young children and the later numbers for 'more grown-up' players. But even in the last pieces Schumann shields his pianists from the more difficult keys: nowhere does he venture beyond three flats or four sharps. Perhaps surprisingly, all the pieces are in duple (2/4 and 4/4) or compound duple (6/8) time. But Schumann creates a wealth of rhythmic diversity within his self-imposed limitations, and monotony only creeps in when all the pieces are dutifully played one after the other - a notion which would surely have horrified the composer.

Fantasia, Aria and other works