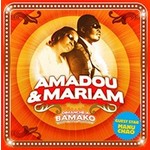 Produced by and featuring world-music star, Manu Chao, 'Dimanchie a Bamako' showcases the talents of blind married couple Amadou Bagayoko (vocals / guitar) and Mariam Doumbia (vocals), who met at a Malian institute for the blind.

While Amadou & Mariam have been making music together for decades, this album is their first high-profile international release. They take full advantage of the attention with a buoyant set of French-language tunes mixing traditional Malian sounds with Latin rhythms, folk, blues, and reggae.

Effortlessly funky yet full of insanely catchy tunes and with the African core of Amadou's stinging, snaking guitar lines and Mariam's hypnotically soulful voice tweaked with touches of reggae, jazz, blues and rock.

Since the release of 'Dimanche à Bamako', the lives of Amadou and Mariam have changed dramatically as they have made the transition from world music cult heroes to full-blown pop stars and their album has become one of the most celebrated African records ever to be released.

Because of the Times

Not Too Late
more suggestions…