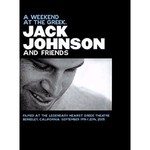 Jack Johnson
A Weekend at the Greek (DVD)

This two DVD set encompasses two separate films, A Weekend at the Greek (shot at Berkeley's famed Greek Theatre at the beginning of his US tour to promote his latest album In Between Dreams) and Live in Japan (shot in Japan at the end of the worldwide tour to promote his second album On and On) as well as over 30 minutes of bonus footage. Directed by The Malloys, both films blend concert performance with intimate interviews and backstage footage.

DVD 2 - LIVE In JAPAN:
1. Backstage Pancakes
2. Konichiwa
3. The Train to Osaka
4. Here's A Song If There Are Any Surfers In The House
5. Group Therapy
6. Tickets with Toshi
7. Show Me The Money
8. Too Much Information
9. City of Tents
10. The Times They Are Like These
11. Credits Featuring The Silhouette of G Love