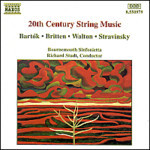 The Hungarian composer Bela Bartók was born in 1881. His father, director of an agricultural college, was a keen amateur musician, while it was from his mother that he received his early piano lessons. The death of his father in 1889 led to a less settled existence, as his mother resumed work as a teacher, eventually settling in the Slovak capital of Bratislava (the Hungarian Pozsony), where Bartók passed his early adolescence, counting among his school- fellows the composer Ernö Dohnányi. Offered the chance of musical training in Vienna, like Dohnányi he chose instead Budapest, where he won a considerable reputation as a pianist, being appointed to the teaching staff of the Academy of Music in 1907. At the same time he developed a deep interest, shared with his compatriot Zoltan Kodály, in the folk-music of his own and adjacent countries, later extended as far as Anatolia, where he collaborated in research with the Turkish composer Adnan Saygün. He acquired a considerable reputation abroad, particularly among those with an interest in contemporary music, although acceptance at home proved more grudging. Dissatisfaction at the growing association between the Hungarian government of Admiral Horthy and National Socialist Germany, led him in 1940 to emigrate to the United States of America, where he died in 1945, after a briefly held series of teaching appointments and a small but important number of major compositions.

Bartók's Divertimento for string orchestra was written in 1939 in response to a commission from Paul Sacher, founder and conductor of the Basle Chamber Orchestra (Basler Kammerorchester). Bartók had first met Sacher in 1929, and had already written for him the Music for Strings. Percussion and Celesta and his Sonata for Two Pianos and Percussion. The Divertimento has something of classical structure about it, with a sonata-allegro first movement, a four section slow movement, with the first section finally recurring, and a final movement that is, formally, a rondo. Texturally Bartók makes use of the Baroque concert grosso. The first movement opens with a first subject stated by the first violins over the repeated chords of the rest of the orchestra. A secondary element alternates between solo instruments and the whole orchestra, before the second subject proper, introduced by loud syncopated octaves, and a development that includes canonic writing. Muted lower strings provide the accompanying figuration at the start of the Adagio, with a second violin theme, the opening figure of which assumes importance. The violas provide a strong opening to the second section, with a third section over an ostinato accompaniment in fourths and fifths. The last movement opens with a statement of the principal subject, continuing to contrast the solo string quartet with the whole orchestra. There is a central fugato section and a quasi-improvisatory violin cadenza, before a reworking of the earlier material, now diverted into other musical channels.

Benjamin Britten's Simple Symphony is testimony to his precocious ability as a child. The work itself was written in 1934, when the composer was twenty, but makes use of thematic material written before he was twelve. The movement titles hint at an element of satire, in what has proved an attractive work, available to competent amateurs as to professional string orchestras. Born in Lowestoft in 1913, Britten went through the customary English education of private and public school, before continuing his professional musical raining, already begun privately with Frank Bridge, at the rather less satisfactory Royal College of Music. His marked ability, facility as a composer, and musical language that had an international as much as a national appeal, aroused jealousy, as his career developed, not least with his opera Peter Grimes in 1945, a work that soon, unlike anything else by his compatriots, entered international operatic repertoire. The Simple Symphony demonstrates a winning command of melody and a deft handling of material and string textures, making the work one of the most attractive of the string orchestra repertoire. Each movement has a descriptive title that aptly captures its mood.

The English composer William Walton, born in Oldham in 1902 and a chorister and later student at Christ Church, Oxford, owed much of his earlier success to his friends and patrons the Sitwells, with whom he collaborated on Façade. During the course of his life he wrote a considerable quantity of film music, of which the music for Laurence Olivier's 1944 film of Shakespeare's Henry V remains the best known. The film included a scene not in Shakespeare's play Henry V, although graphically described by Mistress Quickly. The death of the old drunkard Falstaff, once a boon companion of the young prince, provided Walton with the opportunity for a moving Passacaglia, a Short piece that unwinds over a repealed bass figure. Equally moving is the gentle "Touch her soft lips and part", which was written for the parting of Falstaff's companion Pistol and his landlady Mistress Quickly.

The Son of a distinguished Russian singer, Igor Stravinsky spent his childhood and adolescence either in St. Petersburg or, during the summer, at the country estates of his relatives. He studied music briefly with Rimsky-Korsakov, but first made a name for himself in Paris with commissions for the Russian ballet impresario Dyagilev. He spent the years after the Russian Revolution of 1917 in Western Europe and in 1939 moved to the United States of America, settling finally in Hollywood. He wrote his Concerto in D in response to a commission from Paul Sacher to celebrate the twentieth anniversary of the foundation of his Basle Chamber Orchestra in 1946. The work was first performed by the orchestra in Basle on 27th January 1947. In three movements, the concerto opens with a bold introduction and a movement broadly in tripartite sonata-form, leading to a slow movement Arioso in a lyrical spirit later to become familiar in Stravinsky's opera The Rake's Progress. The final Rondo follows without a pause, continuing, as its title proclaims, in that highly characteristic form of neo-classicism that Stravinsky had made his own, at once identifiable by its melodic contours, harmonies, rhythmic figuration and structure.

Treasure of the Sierra Madre (The)

All This, and Heaven Too / A Stolen Life
more suggestions…