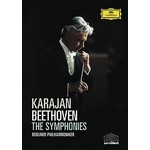 With the Berliner Philharmoniker and a stunning cast led by soprano Gundula Janowitz, these performances remain the benchmark recordings unsurpassed by subsequent readings. Along with his role on the podium, Maestro Karajan was also responsible for the thrilling visual direction.

These recordings from the late sixties and early seventies offer insight into Maestro Karajan's role not only as a leading conductor but also as a pioneer in new media and filming techniques. This production set a new standard for the interpretation of Beethoven's Symphonies and in terms of music filming in general.