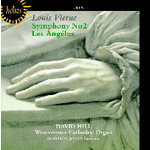 In his last recording at Westminster Cathedral before he moved to Winchester to become organist and choirmaster there, David Hill recorded this, perhaps the most popular of Vierne's organ symphonies. Also on the recording is Les Angélus, sung by Gordon Jones. This is a setting of three reflective and devotional poems by Jehan le Povre Moyne telling of the Angelus bell which rings at sunrise, noon and sunset.

A wonderful recording of the familiar and unfamiliar music by one of the great organist-composers of the early part of the 20th century.