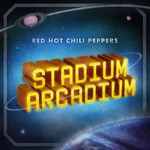 Exuding all the passion, energy and funked-up rock that have made the Red Hot Chili Peppers one of the most popular bands in history, the 2-disc set that comprises 'Stadium Arcadium', simply put, will knock your socks off.

Singer Anthony Kiedis calls it "the best thing that we've ever done... There's this weird kind of subliminal undercurrent that is suggestive, in a spirited way, of our earliest records."

"After a few years away from the recording studio, the Red Hot Chili Peppers are back with what amounts to the equivalent of about 3 or 4 albums (depends how you look at it) on the amorphous double-disc set that is 'Stadium Arcadium'. And, after having the weekend to live with it, I'm convinced that its 28 tracks are proof-positive that the Chilis are as relevant to today's music scene as they have always been. Admittedly, you do need a few run throughs to begin to appreciate 'Stadium Arcadium' properly. However, when you consider that it includes the full gamut of styles & influences of the band's four members (Anthony Kiedis, Flea, John Frusciante and Chad Smith) then that's no real surprise.

From Funkadelic-inspired soul to Hendrix psychedelia, the grit of The Stooges to the glam of David Bowie + a bit of Grand Master Flash thrown in for good measure… It's all here, and then some. In fact, getting through the whole thing in one sitting may seem a little daunting to some, as it is quite lengthy. But believe me, once you start you'll be surprised how quickly you'll be enticed into craving its many sultry vibes and grooves. Which is not to say that there aren't edgier numbers on offer either. Don't worry about that, the variety and temperament of the different songs are perfectly metered throughout both CDs.

Bearing all this in mind, it seems more than a little silly to start harping on about particular cuts on something this expansive, although one thing is for certain, Frusciante's contributions are exemplary in the extreme. Whether it be stompin' rock riffs, atonal single-note embellishments, tight-as funk work-outs or loose, soaring lead breaks; John Frusciante is one of the most talented and interesting guitarists / musicians working in rock today, and completely underrated IMHO. That's not to say that the other Chilis are at all lacking on this, the group's 9th album. Indeed, Smith lays down plenty of solid, funky beats throughout; Kiedis gives us his best vocal performances ever and Flea as always, is the man! Therefore, it's fair to say that 'Stadium Arcadium' is the combined results of their concentrated efforts as a four-man unit - five if you count long-time producer & mentor Rick Rubin. This winning formula has produced what is quite possibly the Red Hot Chili Peppers' most exciting release in a note worthy career, and how they'll follow it is anyone's guess.

Take the earthy soulfulness of 'Blood Sugar Sex Magic', add a little freakiness ala 'One Hot Minute', then drop in the confidence and appeal of albums like 'Californication' & 'By the Way' and you pretty much have 'Stadium Arcadium'. I'd doubt that it's going to turn non-believers into Chili Pepper nuts over night, but for the converted it'll prove indispensable!"
-MARTY (15th May, 2006)

"Having a stellar career that began in the early '80s with their groundbreaking fusion of rap and funk rock - culminating in the release of such fantastic albums as 'Mother's Milk' and 'Blood Sugar Sex Magik' - it seemed improbable that the Red Hot Chili Peppers would reach such great heights again. However, in mid-2006 the group issued this incredible 123-minute album, which features a hugely successful string of singles ("Dani California", "Tell Me Baby", "Snow"…) and some of the best musicianship these guys have ever waxed!

On this all-encompassing double set Anthony Kiedis, Flea, John Frusciante and Chad Smith give you everything they've got - in bucket-loads!! With all their combined energy and musical skills to the max, there is no doubt that 'Stadium Arcadium' is the Red Hot Chili Peppers' crowning achievement."
- GEOFF (18th April, 2007)

Mellon Collie and the Infinite Sadness

Come Away With Me