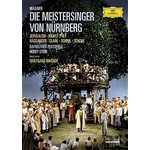 This authentic production dispenses with the common clichés to reveal the humanity of each character - here, Beckmesser (Hermann Prey) is no longer a foolish caricature but a cultivated intellectual; Stolzing (Siegfried Jerusalem) emerges as a thoughtful individual rather than aggressive aristocrat; and Hans Sachs (Bernd Weikl) sheds his solemn patriarchal veneer to become a likeable middle-aged man

"Hermann Prey´s interpretation of Beckmesser as a cultivated intellectual is a triumph of dramatic and vocal artistry: a stunning performance . . . Brilliant . . . Bernd Weikl as Sachs - an almost unique combination of musical refinement and expressive power". (Abendzeitung, Munich)

Peter Grimes (Complete opera recorded by the BBC in 1994)