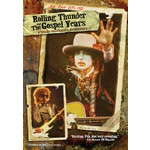 Director & Producer Joel Gilbert weaves the story of this monumental period of Dylan's life and music through revealing insider portraits, exclusive photos, live concert video clips and TV footage from 1975-1981, and with visits to the Vineyard Church, the Fox Warfield Theatre, and more.