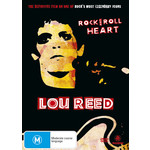 A stunning portrait of one of the most influential and iconoclastic talents in modern music tracing the life and career of singer-songwriter Lou Reed. Spanning three decades - from the formation of the Velvet Underground, to his extensive solo career, and to his most recent collaboration: the futuristic rock opera Time Rocker - and brimming with archival concert footage, the film is a major insight into the singer-songwriter of classics such as Heroin, Sweet Jane and the infamous Walk on the Wild Side . Interviews include Reed, his friends and band members, as well as major artists David Bowie, David Byrne, Patti Smith, Suzanne Vega, Dave Stewart and Phillip Glass . Screening at the 1998 Sundance Film Festival, the film is as much an engrossing portrait of the artist as it is a walk through the turbulent and fascinating times that shaped his music.