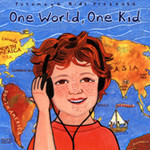 When his friend Eric was ill with cancer, 6-year-old Skyler Pia wanted to cheer him up. So he did what most kids his age only dream about: he went into his dad's studio and, off the top of his head, hosted a radio show. Skyler's charming world music show features international songs from live Putumayo Kids CDs and information about the artists and cultures.

Skyler's parents were so proud of his work that they shared his recording with everyone they knew, including Bonnie Raitt - a longtime fan of Putumayo World Music. She suggested they send the show to Putumayo founder Dan Storper, who loved it so much he decided to release it as a specially-priced CD. The result is 'One World, One Kid', a benefit CD with all of Putumayo's proceeds going to Make-A-Wish Foundation. Skyler picked Make-A-Wish because they had helped his friend Erik and he wanted to make sure others benefited as well.

"Music makes people feel good," says Skyler. "and I wanted to help my friend. Now, other kids will be able to enjoy these songs, and kids who are very ill will feel better, too."

For his part, Storper sees a bright future ahead for Skyler. "He's a natural DJ and an amazing kid. But he's like so many other young people today who enjoy hearing interesting international music and learning more about the world. One World, One Kid truly embodies the spirit of Putumayo Kids."

Putumayo will donate 100 percent of its proceeds (at least $2 per CD and a minimum of $50,000) to the Make-A-Wish Foundation. The Make-A-Wish Foundation grants the wishes of children with life-threatening medical conditions to enrich human experience with hope, strength, and joy. It is the largest wish-granting charity in the world, with 74 chapters in the US and its territories and affiliates covering more than 30 countries on five continents.