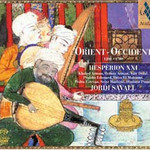 "Finding the common ground that can symbolise a shared humanity has been the impulse for Daniel Barenboim and Edward Said's West East Divan Orchestra and, more recently, violinist Daniel Hope's East Meets West collaboration.Yet for some 30 years, Catalan early music guru Jordi Savall has embodied precisely the same ideals with his ensemble Hespèrion XXI.Their Orient-Occident project creates a flowing dialogue of music from Christian, Jewish and Muslim traditions and medieval times, when the Mediterranean helped to link rather than divide cultures. Hespèrion's performances may be the result of painstaking scholarship, but it is not so much the dust of medieval manuscripts as that of the desert that makes these latterday troubadours so compelling. Savall's virtuosity is so understated as to risk being taken for granted, but the defining rhythmic discipline, the mutual understanding that permits brief flights of improvisational fancy, has a powerful effect. Prayers, dances and laments seemed to bubble up from the same wellspring of experience, voice and instruments echoing each other in assent, crossing great divides." The Guardian, June 13th