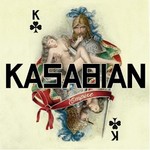 This special edition comes with a bonus DVD containing the 'Empire' video + an exclusive documentary and behind-the-scenes footage. Noel Gallagher says of Kasabian: "They're up there with Prodigy and The Primals...

'Empire' is the magnificent second album from UK band Kasabian - the follow-up to their self-titled 2004 debut. Upon it's release in the UK, 'Empire' debuted easily at #1, earning the band a Brit Awards nomination for "Best Band".

The 'Empire: Limited Edition' comes with a bonus DVD containing the 'Empire' video + an exclusive documentary and behind-the-scenes footage.

"They're up there with Prodigy and The Primals. 'Screamadelica' is the definitive guitar dance record, it's not even indie dance or any of that shit, and The Prodigy did it with "Breathe". Kasabian are there now, and they're making music which is unique."
– Noel Gallagher in NME

"A title of Wagnerian grandiosity - and lo, Kasabian rise to the challenge."
- NME

"Fun, attitude-packed and vitriolic all at once, Kasabian are back... and it sounds like they're having a damn good time."
- GIGWISE.com

"(Empire)...very much announces the band's comeback in spectacular fashion."
- Indielondon.co.uk

Send Away the Tigers

The Fat of the Land
more suggestions…