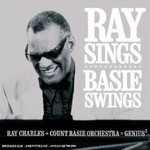 Genius in his prime, singing a bevy of timeless Charles classics - with big band arrangements recreated and re-recorded in perfect sync with Ray's incredible original vocal performances. The results are extraordinary!

From the Fantasy master tape vaults, a rare treasure was unearthed. Vintage, never-before-released, absolutely stunning Ray Charles performances - Genius in his prime, singing a bevy of timeless Charles classics, including "Let the Good Times Roll", "I Can't Stop Loving You", and "Georgia on My Mind".

The only problem was that while the power and nuance of Ray's vocals were recorded perfectly clearly, the accompanying big band parts on this 2-track stereo tape were, conversely, quite poorly-recorded and barely audible. But Ray Charles vocal performances this good just had to be released and heard somehow.

Fortunately, with the benefit of modern recording technology and one of the most swinging big bands on the planet - today's Count Basie Orchestra, under the direction of Bill Hughes - these rousing big band arrangements were recreated and re-recorded in perfect sync with Ray's incredible original vocal performances. The results are extraordinary!

'Ray Sings, Basie Swings' is well befitting the genius of the one and only Ray Charles.

Aces Back To Back