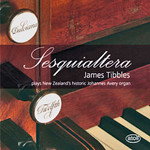 The Avery Organ
The London organ builder John Avery (1755-1808) was a highly colourful character, falling foul of the law on occasion, and having a reputation as a 'shocking drunken character'. Despite this he was a signifi cant organ builder, responsible for some important organs, including those in King's College Cambridge and Winchester Cathedral.

"This disc is interesting for two reasons. The first is the organ which dates from 1779. One would not expect to find such an instrument in New Zealand which started to be colonized in the 1840s. It was built by the English organ-maker John Avery (1737/55-1807) who was called "an excellent workman" by an English writer in the 19th century. Several of his instruments have survived, among them the 1799 organ in Winchester Cathedral. He also was one of the organ builders who repaired the organ of King's College in Cambridge from 1803 to 1805. The organ in Auckland is the largest of Avery's extant instruments, but the year of building is not known. In 1859 it was transported to New Zealand and in 1898 was placed in Ponsonby Baptist Church. This is an attractive disc, not only because of the repertoire and the instrument, but also because of James Tibbles' fine interpretations. He effectively explores the possibilities of the organ to the advantage of this particular repertoire." (MusicWeb May 2015)

17-19 Voluntary v
John Stanley, from Ten Voluntaries for the Organ or Harpsichord, opus 6

Spirit of the Land