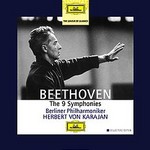 The classic recording of the complete Beethoven symphonies conducted by master Karajan.