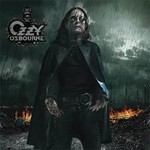 'Black Rain' finds the two-time Grammy Award winner & Rock 'n' Roll Hall of Fame inductee as vital, creative and evocative as ever. You also get the clear sense that he's operating at the peak of powers, as a singer & songwriter.

"I Don't Wanna Stop". "Not Going Away". "Thank God for the Almighty Dollar". "Civilize the Universe". "Black Rain". "Countdown's Begun". "Trap Door"... You can tell by looking at many of the song titles on 'Black Rain' - which at the time of release was the rock legend's first album of new studio material in six years - that Ozzy Osbourne took a good look at his own life and the world around him whilst putting it all together. He also salutes his many fans here (who are amongst the most devoted in the world) with such songs as "Here for You" & "Lay Your World on Me".

'Black Rain' finds the two-time Grammy Award winner & Rock 'n' Roll Hall of Fame inductee as vital, creative and evocative as ever. You also get the clear sense that he's operating at the peak of powers, as a singer & songwriter.

Ozzy co-produced the album with Kevin Churko and recorded it with his touring band: Zakk Wylde (guitar), Mike Bordin (drums) and Blasko (bass). Ozzy says that he felt a new freedom while recording the album at his home studio in Los Angeles. The result: songs that are not only hard-hitting but adventurously arranged and sonically fresh. Explains Ozzy, "It's a well-put together album. I think it's evident that it hasn't been just slapped out and put down. I took my time on the album and Zakk (Wylde) plays some amazing stuff as always." Ozzy feels 'Black Rain' is the true follow-up to his classic 'No More Tears', the 1991 album that also challenged the expectations of what an Ozzy Osbourne album should sound like.

Some of the songs on 'Black Rain' are ominous in their emotional tone - they examine a world teeming with greed, war, deception, bad drugs ("11 Silver", a tune about crystal meth) and environmental havoc. Ozzy also zooms in on the overriding sense of fear & dread that define our times - perpetrated, he feels, by news programs that make "entertainment" out of terrible news events.