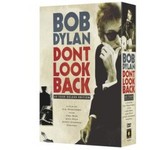 In spring, 1965, Bob Dylan, 23, a pixyish troubador, spends three weeks in England. Pennebaker's camera follows him from airport to hall, from hotel room to public house, from conversation to concert. Joan Baez and Donovan, among others, are on hand. It's the period when Dylan is shifting from acoustic to electric, a transition that not all fans, including Baez, applaud. From the opening sequence of Dylan holding up words to the soundtrack's "Subterranean Homesick Blues", Dylan is playful and enigmatic.

"This is a well-presented second look at the classic Pennebaker '60s classic. Has stood the test of time well and shows how interesting Dylan was then, off stage as well as on stage. The new second DVD is made up of 20 hours of previously unused footage. Accompanying 168 page book and memorabilia make for a very special package. Should make any Dylan fan happy."
-GRAEME