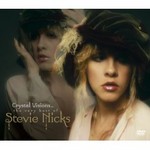 Rock's superstar chanteuse presents this compilation, which covers her entire solo career in a limited edition CD+DVD package. The 'Crystal Visions' DVD features Stevie's voice-over commentary for each video and her artwork.

How beloved is Stevie Nicks? All six of her original solo albums, spanning 1981-2001, plus two "best of" collections, have been certified at least Gold. Rock's superstar chanteuse now releases the compilation 'Crystal Visions', which covers her entire solo career for the first time in a limited edition CD+DVD package.

'Crystal Visions: The Very Best of Stevie Nicks' is exactly what the title implies and features some previously unreleased live tracks on the CD, as well as Stevie's voice-over commentary for each video and her artwork on the DVD.

The Very Best of Fleetwood Mac

The Very Best of Sheryl Crow

Long Road Out of Eden