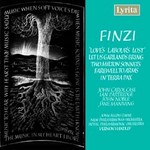 In 1946 Noel Iliff was to produce Shakespeare's Love's Labour's Lost for the BBC Home Service His wife, Simona Pakenham, was adapting it. She was musician enough to be writing a book on Vaughan Williams, and to have recognized Finzi's gifts. He agreed to compose incidental music for sixteen players. As he was a slow worker, he was shocked to find he had only three weeks. But "I rather wanted to do it," he wrote to a friend, "just to show myself that I could do it."