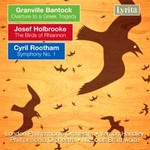 "All in all a fine release which makes a signal virtue of variety."
(MusicWeb June 2007)

"As usual with Lyrita the sound quality is superb, the playing totally inspiring, the programme notes are helpful and the repertoire is totally challenging – and perhaps even essential"
(MusicWeb Aug 2007)

Both Cyril Bradley Rootham and Josef Holbrooke worked under handicaps, one of which they shared. Why is most of their music unfamiliar to listeners who did not hear it before the war? The answer incurs knowledge of a historical phenomenon.VaughanWilliams was born in 1872, only six years after Strauss and Sibelius, and eight after Debussy. Within ten years all the following were born: Holst, Ravel, Ireland, Bax, Bartok, Stravinsky, and the two composers who now concern us.As in the sixteenth century a whole range of musical peaks and foothills rose almost within a decade. To change the metaphor, it must be stimulating for composers to find themselves within a galaxy, but fromsome of themmust perforce be witheld the wider recognition theymight have earned if they had shone alone, not among brilliantly distinctive stars.