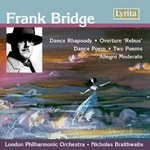 "Nicholas Braithwaite's 1970s Bridge orchestral revivals have been well worth waiting for.

The Dance Rhapsody and Dance Poem are separated by only five years. The Rhapsody is given a grand gait with phrases and treatments recalling his own Summer, Elgar's Cockaigne, Julius Harison in his Troubadour Suite, Tchaikovsky and even the pomp and circumstance Bliss of the 1930s. The gong that ends the first segment of the Rhapsody - a sumptuous grandly confident piece - is stunningly recorded.

The Dance Poem is more subtle, more airily scored and leaning towards There is a Willow rather than the frank romanticism of Summer. It is in six sections although here tracked as one - The Dancer, Allurement; Abandon, Tenderness, Problem and Disillusionment. It is evidence that the Great War may have accelerated and intensified a trend away from grand romanticism rather than being the fons et origo of Bridge's dissonance.

The Two Poems are from the depths of the Great War. While both pieces carry pastoral-spiritual superscriptions from Richard Jefferies one can sense the dark tinge in the horizon's clouds. This is not an uncomplicated untroubled ecstatic mirage although there are some gloriously ecstatic moments which hark back to Summer. One thinks of warm evocations of the countryside such as Suk's Summer and Schoeck's Sommernacht in the case of The Open Air but an elfin irrepressible energy bristles in the unstoppable scherzo that is The Story of My Heart – once recorded by the composer. This might almost be a harbinger of the great upward swing of Enter Spring. It is a delightful piece complete with its echoes of Chabrier (España), Ravel and de Falla (El Amor Brujo). Not to be missed.

Rebus dates from the year before Bridge's death when another war was already playing out. It's his last completed work and is meant to describe how rumour spreads.

Bridge was working on a Symphony for Strings on the day of his death. All that survives is a meaty single Allegro Moderato. The final page of full score was incomplete and the movement was brought to fruition by Anthony Pople. It's fairly gaunt but not as forbidding as the Fourth Quartet. Like Rebus the music is full of intrigue but is fascinatingly reminiscent of Hindemith and Rawsthorne.

These recordings were first issued on very expensive vinyl in the late 1970s as all-Bridge collections: SRCS-114 Rebus; Dance Poem; Dance Rhapsody and SRCS-104 Oration; Two Poems; Allegro Moderato. Oration will presumably be issued on CD coupled with Bridge's Phantasm in turn 'extracted' from an LP SRCS-91 which included Moeran's Rhapsody No. 3 – the latter appearing on SRCD.248 having already been issued in March 2007. There's some thoughtful work going into the Lyrita-Wyastone Estates reissue programme as the open-handed playing durations of most of these new CDs goes to prove.

The cover of the booklet includes a detail from the original LP cover of SRCS 114.

Sinfonia (with music for Brass ensemble)

Orchestrations by Sir Henry Wood (Incls Mussorgsky-Pictures at an exhibition)