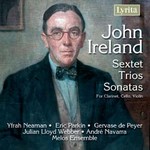 "The playing is fantastic and always committed and vitally, the depth and feeling of Ireland's music is communicated to the listener through every note"
(MusicWeb Aug 2007)

"This is an extremely valuable and pleasing set. It makes for vital and deeply rewarding listening in the twentieth century's best tonal lyrical-impressionistic vein."
(Bargain of the Month MusicWeb Sept 2007)

In a letter to Sir Henry Wood, John Ireland once described himself as "England's most laborious composer." More likely than not this was a typical Ireland exaggeration, and yet there is no denying the fact that, compared to some of his contemporaries, his output is relatively small. If we include the two early string quartets which were published posthumously, the youthful sextet (which he did not release until 1960) and the four duo sonatas, then there are just ten chamber works in his catalogue. Always conscious of what he called the irrevocability of publication, he was known to have destroyed much early work. What survived would sometimes be refashioned, as in the case of the Third Trio. This began life in 1913 as a trio for violin, clarinet and piano. Two years later it emerged for piano and strings, and then as late as 1938 was entirely rewritten as we have it now.