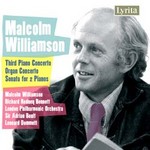 "Wholly involving from start to finish, with music of immense freshness and vitality"
(MusicWeb Sept 2007)

My first piano concerto appeared at Cheltenham in 1958 and travelled to the Albert Hall for the 1959 Proms. The critical censure that it received caused me to draw into myself and to write a Sinfonia Concertante with solo piano, trumpet trio and string orchestra. This 12-minute work was fully two years in the writing and the problems of the concerto style were at the front of my mind during that period. By chance I heard of a competition in Western Australia at the end of 1960 for a concerto for piano and strings, and the labour pains of the Sinfonia Concertante generated the impulse to write in some eight days a work which won this competition and came to be my second piano concerto. The next year I had to set aside the Sinfonia Concertante once again. Sir William Glock had invited me to write an organ concerto for the Proms and the Australian Broadcasting Commission asked for a full-scale piano concerto, the third. The organ concerto was a labour of love. It was written in honour of Sir Adrian Boult, who conducted the first performance. The first performance of the third piano concerto was given by John Ogdon with the Sydney Symphony Orchestra under Joseph Post, and I decided to dedicate the work to this astonishing and fine pianist. Sir Adrian Boult in Europe and Leonard Dommett in Australia have guided me as soloist through performances of both concerti. (Malcolm Williamson)