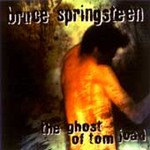 THE GHOST OF TOM JOAD isn't a rock and roll record. Named for the protagonist of John Steinbeck's Depression-era novel THE GRAPES OF WRATH (Springsteen cites John Ford's film version in the booklet) and performed largely on an acoustic guitar with the occasional support of an Appalachian mountain fiddle and pedal steel guitar, it's part folk album, part protest record, part short-story collection.

It'll inevitably be compared to NEBRASKA, the similarly stark song-cycle Springsteen foisted on an unsuspecting world in 1982. Yet TOM JOAD is more of an arranged album, with careful guitar arpeggios supported by an eerie bed of sustained synthesizer chords (played by E Street Band veteran Danny Federici and Springsteen) and a few full-band folk arrangements. It's also more of an explicit statement. Whereas the characters in NEBRASKA were lost souls wreaking havoc on the highways and backroads of the badlands, those on TOM JOAD are a mix of working-class Americans and immigrants running across (or into) the country in search of a pot of gold that isn't there. The characters are modern, but the stories are as old as the Great Depression that Steinbeck chronicled--Springsteen's message being that after all these years we're still knee-deep in it.

There are some familiar Springsteen vignettes--the conflicted friendship of two border guards in "The Line," the family line of steelworkers in "Youngstown"--but the characters themselves are new, and the clearness of their anger is almost radical. Pondering the corporate bosses who built a steel plant in Youngstown, used up the local resources, then walked away, the narrator's father says, "Them big boys did what Hitler couldn't do." Springsteen does offer the working class a chance at redemption. "Galveston Bay" brings together a Vietnamese fisherman, a disgruntled Vietnam vet and the Ku Klux Klan; by the time it's over, two Klansmen are dead and the American vet has learned, if not to overcome his prejudice, to at least live and work side by side with his Vietnamese compatriot. It may be a not-so-veiled lesson for the flag-waving patriots who misinterpreted Springsteen's anthem "Born In The U.S.A."