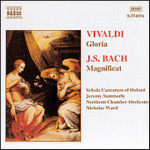 Antonio Vivaldi was born in Venice the son of a professional violinist. Although Vivaldi underwent training for the priesthood, it was as a musician that he evidently excelled: he began playing the violin at an early age and it is known that he deputized on occasion for his father who held a post as violinist at St. Mark's. Despite his ordination to the priesthood in 1703, Vivaldi decided to pursue a musical career; his first appointment was that of maestro di violino at the Ospedale della Pietà where he maintained a teaching post on and off for much of his early life. It was here that the young composer produced a great deal of his choral music, although the works featured here were probably not among them since they are much more elaborate than anything the singers at the Pietà could have coped with.

One of the most striking features of Vivaldi's style is his ability to fashion melodies out of even a cadential fragment, and this facility is nowhere better illustrated than in the opening movement of the Gloria. The first figure, with its distinctive octave leaps, is at once rhythmically vital and harmonically stable and lends itself easily to sequential treatment. Typically for a violinist perhaps, the composer often displays a tendency to leave intricacy to the instruments and to employ the chorus homophonically, as here. The second choral movement, Et in terra pax, explores this idea further, while extending the harmonic range with a profusion of Neapolitan sixths and some extraordinary modulations. Even more unorthodox is Laudamus te in that the opening ritornello is a slightly uncomfortable seventeen bars long; Vivaldi here allows himself some florid vocal lines for the two soprano soloists and uses chains of suspensions - a favourite device. The short homophonic setting of the words Gratias agimus tibi gives way to a fugue of some dexterity, although it must be said that Vivaldi is at his best when dealing with simpler forms: the following soprano aria with obbligato oboe is a case in point. Here a long melody is gracefully unfolded in the metre of a Siciliano, while the continuo line recalls the octave leaps of the first movement. Sequence is again much in evidence in Domine Fili unigenite, the composer disregarding convention by resolving suspensions in the violin parts by downward leaps of a Seventh. Domine Deus, Agnus Dei uses contrasting forces: the alto soloist, accompanied by continuo, has descending scalic lines which are punctuated by chordal interjections from the choir and orchestra. The penitential section continues with both groups singing separate triple-time movements, and the work concludes with a recapitulation of the opening for Quoniam tu solus Sanctus and a final fugal movement.