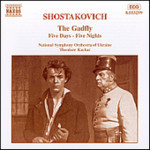 "The excellent playing by the National Symphony Orchestra of the Ukraine. Theodore Kucher's committed interpretations and well balanced sound are all additional reasons to get the Naxos recording"
- Fanfare

"The excellent playing by the National Symphony Orchestra of the Ukraine. Theodore Kucher's committed interpretations and well balanced sound are all additional reasons to get the Naxos recording"
- Fanfare

Once upon a time all that was known of Shostakovich in the West was the public face of a handful of symphonies and the private mind of the string quartets - an autobiography of rhetoric and bombast, bleakness and satire, bitterness and disillusionment. Since his death, however, out of the memories and manuscripts of a faded, oppressed past, other dimensions have surfaced: the romantic, self-borrowing, ideological tunesmith of popular theatre and patriotic cinema … the banner-waving follower of revolutionary pathos and epic pomposity … the functional purveyor of easy-on-the-ear, money-spinning trivia for Party and proletariat … Kremlin court-jester. "Chekhov used to say that he wrote everything but denunciations … I agree with him. I have a very un-aristocratic point of view." For Shostakovich there was never a tension between "serious" and "popular". Whatever the outward impression he was no Jekyll-and-Hyde. All expressions, all styles, were simply different facets of the same tonal coin, different windows onto the same personality, bound by a common language, cross-referenced by a recurrent seasoning of irony and innuendo, of sly, subversive aside. Beneath the surface formula, within the associative sound and imagery of a distinctive orchestration - from lean to full-bodied, from quirky ensemble to traditional solo, from subtle evocations of countryside and spintual Mahlerian dreamscapes to battlefields and Stalin portraiture - many a shared cryptic, Schumannesque subplot lurks. No matter whet context or commission, Shostakovich never lost the capacity to make his notes mightier than his masters. To those who got the subliminal message there was always a joke or a pain, an insult or a protest to share.

Piano Trios Nos. 1 and 2 / 7 Romances on Verses by Alexander Blok for Soprano and Piano Trio, Op. 127