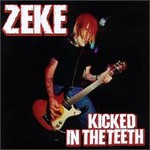 Zeke
Kicked In The Teeth

Kicked in the Teeth, like the albums that preceded it, relies primarily on rip-roaring punk rock & roll guitar riffs and hardcore drum beats, the entire CD slashing by like a Japanese street bike on a rain-soaked highway - blink your eye, and it's passed. As the band's first recording for Epitaph, a label with a considerably large purse, it's rather surprising that Kicked in the Teeth is not sonically up to par with either Super Sound Racing or Flat Tracker, albums made presumably on much tighter budgets. Musically, it's roughly an equal to Flat Tracker, perhaps not as strong, but Zeke does essentially one thing, and one thing well - incredibly fast, out of control punk rock & roll, executed with exceptional lead guitar work. There are, however, some slower-paced tunes - after all, Zeke is not the typical snotty American punk or hardcore act - and they are performed well. For example, the amped-up cover of Kiss' "Shout It Out Loud" is pulled off with aplomb. That's why it's a shame Zeke feels compelled to rely on speed alone to get by. ~ Patrick Kennedy, All Music Guide