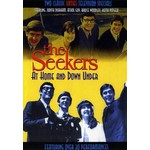 The Seekers
At Home And Down Under DVD

In the 1960s, Australia's fabulous Seekers made four popular television specials. Here on DVD for the first time are the first two specials.

Starting with The Seekers Down Under, the one-hour spectacular that turned Australian tv on its ear. It was filmed entirely on location and takes Judith Durham, Athol Guy, Keith Potger and Bruce Woodley on a sightseeing tour of Canberra, Sydney, Melbourne, Surdfers and the Barossa Valley. In the days of black and white telly in Australia, The Seekers Down Under was shot in colour for an overseas audience, and features 15 of the group's most popular songs, including Turn Turn Turn, Red Rubber Ball and The Water is Wide. The special ends with the band's legendary appearance at Melbourne's Myer Music Bowl.

The group's first TV special The Seekers At Home was filmed in 1966 during their first trip home after three Number One hits in England. It was mainly shot in Melbourne and features 16 songs.