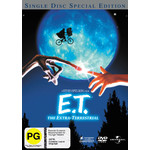 E.T. THE EXTRA-TERRESTRIAL is Steven Spielberg's warmhearted classic delight for both children and adults. It tells the story of an alien creature, E.T., mistakenly left behind on Earth.

When a young boy, Elliott (Henry Thomas), finds E.T. and hides him in his home, both their worlds are changed forever. E.T. teaches Elliott and his two siblings (Drew Barrymore and Robert MacNaughton), whose parents have recently separated, about caring and love while the children protect E.T. from the malevolent world of grown-ups.

Elliott and E.T. become so close that they share emotions; as E.T. becomes ill, so does Elliott. The children end up going on a fabulous adventure trying to help E.T. find a way back to his home planet.