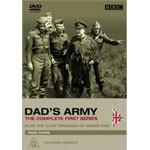 1940. Britain is on the alert for an imminent Nazi invasion. With full-time troops occupied overseas, the coastal defenses are left to a handful of veteran soldiers-The Home Guard. And in Walmington-on-Sea, one inept, feeble and inadequately-armed platoon is very keen to do its bit.

Led by the self-appointed Captain Mainwaring (a bank manager nicknamed Napoleon), the Walmington-on-Sea Home Guard are a casual, disruptive troop. His second-in-command, Sergeant Wilson, has the breeding Mainwaring lacks but is largely ineffectual. And Corporal Jones, the local butcher and a veteran of the Boer War, tempers his eagerness with an infallible ability to completely mess-up anything he is asked to do. Outstanding among the rest of the platoon are Private Walker, a black marketeer who can lay his hands on anything - for a price; mummy's boy, Private Pike; Private Frazer, a cynical Scottish undertaker who always foresees trouble (and is usually right); and the oldest of them all, the near-incontinent Private Godfrey. With Mainwaring's irritating pomposity, and the platoon's total incompetence, life in the Walmington-on-Sea Home Guard is more chaotic than most.

Episodes :-
The Man And The Hour / Museum Piece / Command Decision / The Enemy Within The Gates / The Showing Up Of Corporal Jones / Shooting Pains.