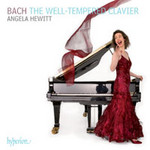 'Hewitt has set a new benchmark. Her touch is admirably clear and light...and she is uniquely attuned to Bach's supple, sprightly rhyhms. A '48' of exceptional grace and beauty. I know of no musician whose Bach playing on any instrument is of greater subtlety, beauty of tone, persuasiveness of judgement or instrumental command than Hewitt's is here' (BBC Music Magazine)

"It is something of an honour for me to review this magnificent set of recordings, first released in 1998 (Book 1) and 1999 (Book 2) and now re-released at bargain price. The reputation of Angela Hewitt as a Bach interpreter of the highest order was first established in reaction to these performances, and they have received numerous international awards...this is an otherwise magnificent and important set of recordings."
(MusicWeb Bargain of the Month March 2008)

August 2007 saw the start of Angela Hewitt's Bach World Tour in which she brought her celebrated performances of The Well-Tempered Clavier to twenty-five countries on six continents. This tour celebrated the wonderful voyage she began in 1994 when she undertook to record all of Bach's major keyboard works for Hyperion Records - a project that took eleven years to complete. Concurrently, Hyperion is releasing a limited edition box set of Hewitt's iconic recordings of 'The 48' - held by many critics to be the definitive piano version of Bach's incomparable masterpiece.