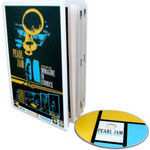 Pearl Jam
Immagine in Cornice - Picture in a Frame (DVD)

This "in concert" film of Pearl Jam is directed by renowned photographer, filmmaker and longtime friend of the band, Danny Clinch and includes over an hour and a half of live performances and rare, behind-the-scenes footage from the bands 2006 European Tour.

DVD captures Pearl Jam's phenomenal live performances, as well as exclusive behind the scenes footage of the band on tour

Featured cities and venues include: Pala Malaguti in Bologna, the Arena di Verona, the Forum in Milan, Palaisozaki in Torino and Duomo Sqaure in Pistoia, Italy.

Bonus Tracks:
A Quick One While He's Away -- Eddie Vedder with My Morning Jacket
Throw Your Arms Around Me
Yallow Ledbetter