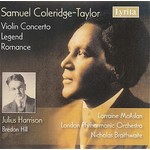 "Coleridge-Taylor's Violin Concerto has now been recorded three times. Even though McAslan was recorded long before the Avie and Hyperion discs, Lyrita's long hibernation meant that it was the last to be issued. In summary this is the grandest and most monumental of the three recordings. Listen to the way she takes the theme with such deliberation at 2:03 in the first movement. McAslan played this on the BBC at about the same time the recording was made. Julius Harrison's Bredon Hill was written to order as an expression of a cherished England in the depths of World War 2. The studio recording was broadcast worldwide. It looks to two Vaughan Williams works: The Lark Ascending and On Wenlock Edge (Housman) of which the song Bredon Hill is the centre of gravity. This version of the Harrison was recorded, like the other tracks, in 1994 and it would have been the recording premiere had Dutton not pipped Lyrita to the post earlier this year with their (almost) all-Harrison CD. It's a magical work with echoes of the RVW Lark and even of the Elgar Violin Concerto. A real feel-good concerto and a work by Harrison that deserves to live on in its nostalgia and pastoral contentment"
(MusicWeb Recording of the Month Oct 2007)

Concerto for Organ and Orchestra / Piano Concerto No. 3 / Sonata for Two Pianos