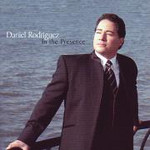 Daniel Rodriguez
In the Presence

This is an album of 12 traditional spiritual and inspirational songs, including "Amazing Grace", "An American Hymn", "The Water is Wide", "Ave Maria" & "How Great Thou Art". "Pie Jesu" and "Panis Angelicus" are sang as duets with NZ soprano Marla Kavanaugh.

'In the Presence' is Daniel Rodriguez' fifth album and his first for Blix Street (the label that introduced us to Eva Cassidy).

Tenor Daniel Rodriguez, an ex-policeman, rose to international fame when he sang at the funerals of his former colleagues who died during the terrorist attack of 9/11 and, a week later, performed for the President at Yankee Stadium along with Placido Domingo. Taken under the wing of Placido Domingo, Daniel Rodriguez has subsequently performed all over the world to great acclaim.

'In the Presence' is an album of 12 traditional spiritual and inspirational songs .... "Amazing Grace", "An American Hymn", "Pie Jesu", "Nearer My God To Thee", "Bright Blue Rose", "On Eagle's Wings", "Panis Angelicus", "Joyful Joyful", "The Water is Wide", "Cerca De Ti Senor", "Ave Maria" and "How Great Thou Art".

"Pie Jesu" and "Panis Angelicus" are sang as duets with New Zealand soprano Marla Kavanaugh and the musical accompaniment is performed by the Czech Philharmonic Orchestra.

Dunedin born and San Francisco-based, Marla Kavanaugh has sung at the America's Cup, for the 9/11 Commemorations in New York and was chosen to sing at the Academy Awards celebrations in LA when Peter Jackson won the Oscar for 'Lord of the Rings'.