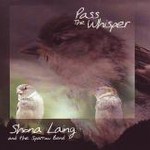 There are a small number of New Zealand singers whose every album is an important musical occasion, in that it promises a fresh collection of songs from someone who is indelibly part of the country's musical psyche: the likes of Neil Finn, Dave Dobbyn, Don McGlashan and, without a doubt, Shona Laing.

Shona Laing's songs ("1905", "Show Your Love", "Neutral & Nuclear Free", "(Glad I'm) Not A Kennedy", "Soviet Snow", etc) have captured the popular imagination of the times, as well as achieving Top 10 Singles success and radio airplay across NZ, America, Australia and the UK, while stubbornly refusing to compromise their intelligence and lyrical integrity.

'Pass the Whisper' is a return to Shona's folk roots. It is all played, acoustic guitar-based, with Celtic colours of pipes, flutes and bhodran (courtesy of Rua's Jimmy Young), the amazing textures of James Wilkinson's guitars, the stand-up bass of Nigel Masters and the drums of Ian Gilpin. Mahinarangi Tocker, Denny Stanway and James Wilkinson join Shona on backing vocals.

'Pass the Whisper' includes seven new songs as well radical re-workings of "Soviet Snow", "(Glad I'm) Not A Kennedy", "Caught" and "Shoulda Bin For You". There is also a "poppy" bonus / ghost track ("Happy Song") from the 70s that features the crazy drumming of the late Bruno Lawrence.

Of the new songs "Taihoa" and "Fact" are obvious stand-outs as radio airplay singles. "Waitakere Rain" and "Windmills" both combine global impressions with a unique sense of New Zealand. Shona shows that she has lost none of her acerbic wit as evidenced in the blues romp "Comfort Song (Not)", a swipe at American foreign policy. The only song on the album not written by Shona is Mahinarangi Tocker's beautiful and bilingual "My Love Be Still".

In Swings the Tide