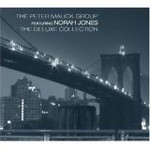 Blues guitarist Peter Malick's career has had some surprising twists that have brought many wonderful collaborations to his life. None is better regarded than the collection of songs here. In the early 2000s Peter Malick began to work with several young, up-and-coming female vocalists whom he'd heard while touring, later writing and recording with them. One of them, pianist / vocalist Norah Jones (who was at the time, playing regularly at the Living Room in New York's Lower East Side) received an invitation to sing some blues with guitarist Peter Malick and his band.

Listening to the rootsy, organic beauty evidenced on 'New York City', you'd never know that the young Norah Jones had never sung the blues before. After she rose to fame in 2002, earning herself eight Grammys, Malick issued an EP of his recordings with her entitled 'New York City', which reached the top half of the Billboard Top 200 Album Chart.

'The Deluxe Collection' is a 2CD US import that comes very attractively presented as a 3-panel foldout digipak package in a deluxe slipcase cover.