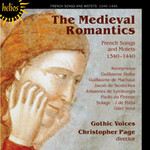 'A revelatory disc. If the ravishing sound of the ensemble does not convince you that this music is of the highest quality, then nothing will' (The Good CD Guide)

'These performances reach an unrivalled level of excellence ... and show just how marvellous medieval music can be' (BBC Record Review)

Music for St James the Greater