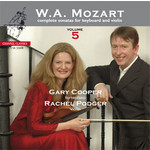 "Podger's violin inflections remain delightfully lively and keenly felt, and Cooper's fortepiano has dancing feet. The upfront recording only increases the sense of two players joined at the hip."
(The Times March 2008)

"The keyboard player gets top billing on this outstanding series of Mozart's violin sonatas, and rightly so: in the earliest of the works recorded here, K31 in B flat, the violin part is optional, and even in his later works for this particular pairing of instruments, the piano is the dominant partner.

Gary Cooper makes the strongest possible case for Mozart on a period Hammerklavier, imparting buoyant, rhythmic élan and wit in the fast movements - the opening allegro di molto of the A flat sonata, K305, is a case in point - and an appropriately "singing" legato in the andantino cantabile of K306 in D. These are the highlights of Volume 5, four sonatas from a set of six written in 1778 and dedicated to the Princess Palatine in Mannheim. Much of the music is high-spirited, but Cooper and Podger make something special of the lengthy and beautiful andantino. They are equally persuasive in the C major sonata, K403 (385c), apparently inspired by Mozart's love for his wife, Constanze, but, like another work associated with Frau Mozart, the great C minor Mass, left unfinished. No other team can match Cooper and Podger for their brio, stylishness and sense of discovery in this marvellous music."
(The Sunday Times)

"Rachel Podger and Gary Cooper give characteristically intelligent and insightful performances of all these pieces, with Cooper offering occasional discreet and imaginative embellishment of the keyboard part." BBC Music Magazine, May 2008 ****

"Podger's violin inflections remain delightfully lively and keenly felt, and Cooper's fortepiano has dancing feet. The upfront recording only increases the sense of two players joined at the hip."
(The Times March 2008)

Sonatas for fortepiano and violin vol. 2

Sonatas for Keyboard and Violin Vol 3